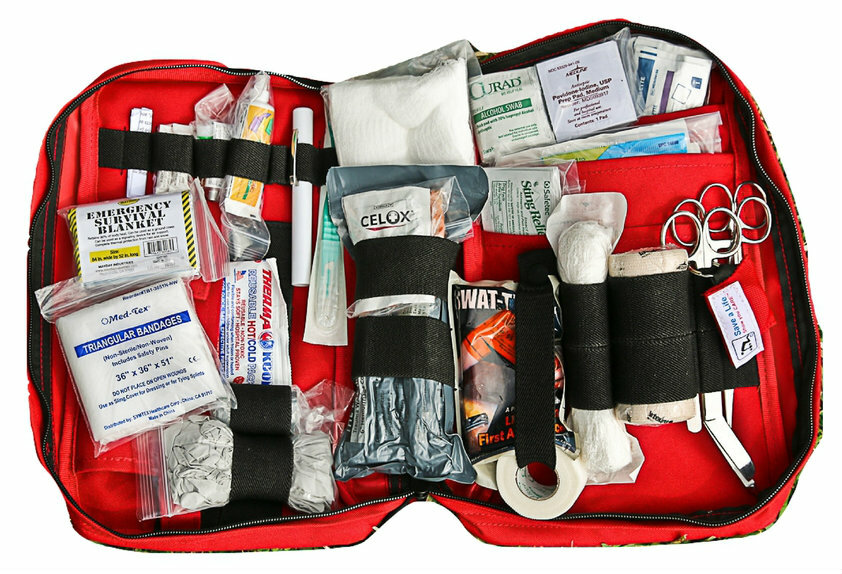 Everyone should carry a med kit. If you have made the choice to responsibly carry a firearm for defense, it’s irresponsible not to have the tools to render aid as well. A med kit should be compact, lightweight, and easy to use.

The medi kit you buy or put together yourself needs to be convenient to carry on your person without being an inconvenience to your daily routine. As seconds pass and the life is slowling drifting away, having a med kit in your car or bug out bag isn’t enough. Since the life you save may be your own, you need to be smart when building your EDC trauma kit.

However, having the necessary tools is just a part of the equation. The gear you own is only as good as the training you have. Every basic emergency medical training should cover the entire spectrum of lifesaving skills. And like shooting, they are perishable skills.

A number of excellent training courses are being offered around the U.S., such as Dark Angel Medical’s outstanding two-day Direct Action Response Training.

BleedingControl.org, an initiative of the American College of Surgeons and the Hartford Consensus, is anoth-er excellent resource that can direct you to courses In your area. When putting together an EDC trauma kit, stick to the basics. Just remember “Stop the Bleeding, Start the Breathing.”

There’s obviously a lot more to emergency first aid, but those are the most immediate concerns and what an EDC trauma kit is intended to address. Your goal is to stabilize the patient until EMS arrives.

All military personnel carry tourni-quets and hemostatic agents. You should too. To quote BleedingControl. org, The only thing more tragic than a death is a death that could have been prevented’ Hemorrhage is the leading cause of trauma deaths. Roughly 80% of com-bat deaths and 50% of civilian trauma deaths can be attributed to hemor-rhage. It’s the most preventable cause of death in compressible injuries—approximately 50% of injuries. An average adult body with a weight of 150 to 180 pounds contains 4.7 to 5.5 liters of blood. A child under 80 pounds contains approximately half that amount. Exsanguination (bleeding out) can occur in less than five minutes from a femoral artery bleed. The national average response time for a Basic Life Support (BLS) ambulance is ten minutes. Paramedics are 12 to 15 min-utes. And in an active shooter or ter-rorist event, EMS won’t render aid until the scene has been secured. You do the math.

Tourniquets have emerged as the standard of care in the tactical envi-ronment due to their ease of use, rapid application, and complete stoppage of blood loss. Current protocol considers the tourniquet an initial lifesaving in-tervention to control massive hemor-rhage from an extremity. The old dogma of “save a life, lose a limb” has been proven to be false. A tourniquet can remain In place for two to four hours. Thousands of com-bat veterans are walking around today with all their limbs because their lives were saved by tourniquet use. A fine-point Sharpies permanent marker should be kept in the kit for writing the time of application on the tourniquet(s) and a -r on the cheek (now preferred placement) or fore-head of the patient. Popular commercial tourniquets include the C-A-TS, SORT-Ws, SWAT-Te and RATS* Tourniquet. Each has its plusses and minuses. In scien-tific studies, the C-A-T, SOFIT-W and

SWAT-T have proven 100% effective in occluding blood flow in upper and lower extremities. As of this writing, there are no scientific studies on the RATS, although it remains a popular option. My everyday carry (EDC) is a C-A-T and a SWAT-T. They’re compact, light-weight, and complement each other. The C-A-T (Combat Application Tourniquets) Is a CoTCCC (Committee on Tactical Combat Casualty Care) recommended tourniquet that has been used by the U.S. military since 2005. It’s the most fielded tour-niquet in combat. Now in its seventh generation, the C-A-T features a patented windlass system that’s robust and easy to use one-handed for self-application. The Gen 7 C-A-T has a single routing buckle system that per-mits very fast application and effective slack removal. The C-A-T is distributed in the U.S. by North American Rescue. Anyone who has recently been in the military has trained with the C-A-T. Although the C-A-T is simple to use and instructions are included, an untrained individual Is unlikely to quickly figure it out under stress. The SWAT-T (Stretch, Wrap And Tuck Tourniquet) from TEMS Solu-tions features a unique stretch re-tention design that’s intuitive to use, making it more likely to be used by a bystander. Instructions are printed on it The SWAT-T is a medical multi-tool that may be employed as a tourniquet. pressure dressing. occlusive device, elastic bandage, sling and swathe, and more. It can be successfully em-ployed for higher axillary and groin applications. And it can be employed

for pediatric and K9 applications, whereas windlass tourniquets cannot. The SWAT-T is being fielded in com-bat theaters and is standard issue In a growing number of law enforcement agencies. Rapid one-handed self-application with the SWAT-T does take a little practice. It’s not as easy as the C-A-T In this regard.

Hemostatic agents are employed for compressible (external) hemorrhage not amenable to limb tourniquet use or as an adjunct to tourniquet removal when evacuation time is anticipated to be longer than two hours. They’re primarily employed to control life-threatening bleeds. They’re not for use in penetrating thoracic or head trauma. They can be used for deep lacerations as long as pleural or peritoneal space hasn’t been breached. Several brands are available com-mercially. All of them perform well on heavy bleeds. The latest generation of hemostatic products performs signifi-candy better than earlier generations. The shelf life of these products is re-lated to sterility, not efficacy. Z-Medicas QuikClot Combat Gauzes, CELOX* Gauze and Chi-toGauzes are CoTCCC approved hemostatic dressings. Current QuikClot products are Kaolin-based. They don’t create heat. Kaolin is a clay mineral. It works by activating the body’s own clotting cas-cade. CELOX and ChltoGauze are chits). san-based. Chitosan is derived from the material that makes up shrimp shells. It forms a gel-like dot when it comes into contact with blood. All have proven safe and effective. They are irrigated out of the wound at the hospital as a byproduct of wound treatment.

Your kit should include a pressure bandage. It is utilized to direct and maintain pressure on a wound with the goal of creating enough pressure to stop the bleeding. It reinforces wound packing. When utilizing any pressure ban-dage, beware of tourniquet effect, which can occur if the bandage is applied too tightly. Always assess distal pulse after application. Many types of pressure bandages are available commercially. 1 went with the North American Rescue Flat Emergency Trauma Dressing (ETC”) for my EDC kit. This dressing features a flat-folded vacuum configuration that reduces its footprint. It has a multi-functional all-in-one design and sim-ple application. There are no pressure bars or hooks to deal with.

Tension pneumothorax is the second leading cause of preventable battlefield deaths. It can develop rapidly (although normally over one to two hours), and is 100% fatal if not treated. The only treatment when it occurs is performed by skilled medical personnel. Laypersons can treat penetrating chest injuries by the application of an occlusive dressing. These chest seals may slow the development of tension pneumothorax and should allow for better breathing.

Occlusive dressings are designed to form a barrier and prevent outside air from entering the pleural cavity from an open pneumothorax (sucking chest wound). Many types of occlu-sive dressings are available, Including the HALO. Chest Seal, HyFin. Chest Seal, Asherman Chest Seal (ACS), FOX Chest Seal, Bolin Chest Seal, and Vase-line Gauze. CoTCCC guidelines specify a vent-ed or three-sided dressing as the first choice and non-vented as second choice. I stay clear of the ACS, as it doesn’t stick as well as the newer de-signs, and the valve is prone to clog-ging. Carry two chest seals to treat both entrance and exit wounds. I have the HyFin Vent Compact Chest Seal Twin Pack in my EDC kit. The HyFin Vent features three-channel pressure relief vents, as well as an ad-vanced gel adhesive that sticks well to blood, sweat, and hair. It has a large red tab for quick peel-and-stick appli-cation and “burping” the seal if need-ed. If the patient gets worse, the seal should be burped to ensure clogging hasn’t occurred.

Personal Protective Equipment (PPE) is essential. Nitrite (latex-free) gloves are a must in any kit. Gloves should be the first thing on and the last thing off. I also keep an MDI. CPR Microshield-Plus'” for mouth-to-mask rescue breathing on uncon-scious patients who have a pulse but aren’t breathing. Eye and face protec-tion is also important.

I keep a Benchmade• 7 Hook safety cutter in my EDC kit for cutting away clothing, including footwear, and for cutting seat belts in a rescue situa-tion. It’s made of 440C (58.61 HRC) stainless steel and has a large coated handle that works well with gloves. It safely cuts through clothing like a hot knife through butter. It has been prov-en superior to trauma shears In mili-tary studies.

No equipment does you any good If you don’t have it when you need It. The Safer Faster Defense SFD Responder ankle pouch Is a great way to carry a personal trauma kit. I first learned about It from S.W.A.T. Editor Denny Hansen. It’s designed to allow com-fortable and discreet EDC. The PIlLster- Flatpack® Tourni-quet Carrier is an efficient low-profile way to carry windlass tourniquets for quick access. Designed for versatility, It can be carried in a pocket, worn hor-izontally or vertically on a belt, or with MALICE CLIPS• for MOLLE/PALS mounting. Are there other Items I’d like to have In my EDC trauma kit? Yes, but this covers the basics. I want to keep the kit lightweight and compact so I’ll be sure to carry it with me at all times.