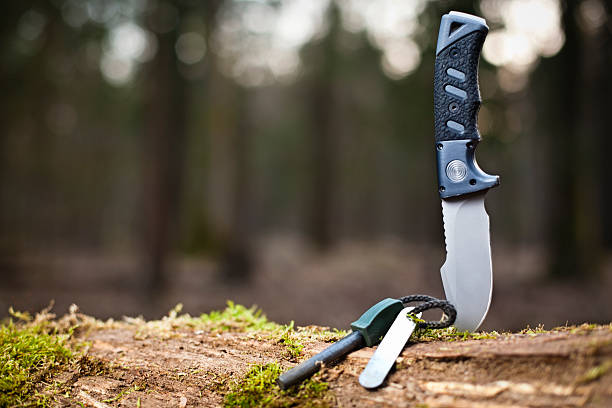 The first evidence of what could be considered a hunting knife dates back to over two and a half million years ago.

These knives were made primarily from the stones flint and obsidian and considered by most to be man’s first tool, serving a myriad of purposes. Perhaps the most important was its use after the hunt, as they provided much of the food for early man.

Having gone through the bronze, copper, iron, and steel ages, the knife is no less important today, as it still serves man daily for a variety of chores.

I have been an admirer of custom-knife makers over the last 15 years. I can tell you that there are numerous interpretations of what a hunting knife is.

The blade will be between 2.5 and 5 inches, with or without a guard and have some kind of handle material.

The top 7 folding hunting knives to look out for

Why is the blade limit 5 inches?

The idea behind the hunting knife is to dress out the animal without cutting into vital areas. Exceeding a 5-inch blade does not allow the average hunter to maintain control of the knife.

Due to its importance and diverse background, the hunting knife is a common staple among custom knife makers and can come in varied shapes and sizes, as witnessed in this hobby.

The drop point is exactly what it sounds like. The drop point hunter is the most commonly made hunting knife and maintains its thickness along the spine and then gently slopes to the point.

Generally, this blade shape is slightly thicker at the point. This blade thickness provides the drop point with the versatility to not only skin but also disjoint and pry. These advantages can be important to the hunter when dressing out a larger game.

The idea of a skinner knife is basically to remove the skin or fur from game. This style knife can also be used to dress out game.

However, the blade shape features a slightly thinner blade and edge, meant for a specific purpose: Designed for elongated cuts and better control of the blade, it ensures the fur maintains its integrity.

The semi-skinner blade is the middle ground between the drop point blade and skinner blade. The slightly raised spine hump extends the curved part of the blade for skinning; at the same time, it maintains the drop point to avoid puncturing the abdominal cavity. Doing so could taint the meat of the animal.

Then, insert the gut hook into the cut with the smooth top against the abdominal cavity. With the top edge of the blade against the inside of the animal, you will pull toward the throat, creating a zipper effect allowing you easier access to dressing out the game.

If there is a drawback to this knife, it is that many hunters find it difficult to sharpen the hook area of the blade.

Small game can be even more challenging to dress out than large game. Consequently, makers build what are called Bird and Trout knives — 3 to 3.5-inch-long thin, slender blades that can be found with both drop point and skinner style blades. The blade is designed primarily for the task of dressing birds and fish, hence the name.

Birds are generally dressed out to harvest the breast meat. Fish are dressed to get the filets. For most hunters and fishermen, the remainder of the bird and/or fish is discarded.

The other choice is a folder with a 2.5 to the 3-inch blade, with some featuring a blade and a gut hook. As it implies, the idea is to insert the hook into the bird or other small game and utilize it to pull out the intestines and the rest of the intestinal tract.

I have seen my father-in-law, dress out dove, quail and pheasant with his folder. Generally, a 2.75-inch drop point blade or a multi-blade with a 2.25-inch and 2.75-inch blade, featuring a combination of a skinner blade and drop point blade.

Granted, his expertise with dressing out animals makes it look easy. Some hunters have even dressed out deer with a folder, while most don’t think of a folding knife when it comes to this task. But there is always a place for these knives in your hunting gear.

Hunting knives provide the widest array of styles and materials of any knife. This extensive lineup gives you the opportunity to get the right tool for the job no matter the game.

Remember, the rifle harvests the game but it is the knife that creates what becomes the trophy.