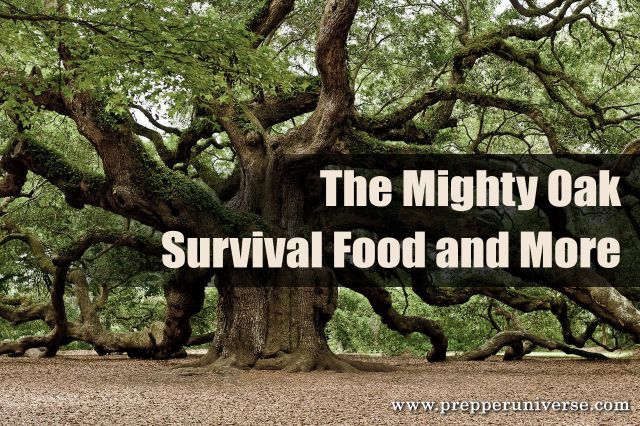 Oak is a favorite tree of survivalists.  It’s strong, dense wood is favored for utility and for firewood.  Acorns, though most species need to be prepared by leaching, are an important survival food.  Plus the acorns, bark, roots, and leaves provide important herbal medicines. Native Americans used many species of Oak for medicine and food. 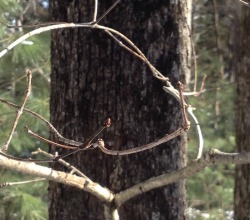 Mainly the part used for medicine is the inner bark. With this being said, the

acorns have been considered medicinal food as well as staple food.

By Nathaniel Whitmore, a Contributing Author to SHTFBlog and SurvivalCache

Oak is a far more versatile survival example than many realize. The uses of Oak are not limited to simple acorn consumption. For example, in The Way of Herbs Michael Tierra discusses acorn porridge as a common food for the treatment of tuberculosis and other wasting diseases.

Acorns were a principal staple of our ancestors.  Talk of the Paleolithic diet has persisted long enough for real Paleolithic snacks to emerge among the over-priced, plastic-wrapped Paleo bars.  Yet in spite of the increase in grain-free snacks, cookbooks, and diet practices, I have not seen any increase in acorn use.  Though, a quick google search did turn up a few sites selling acorn flour.

The acorn was quite possibly one of the major foods that allowed our Paleolithic ancestors to start building agricultural society from hunting and gathering.  Largely, acorns are edible, though most species need to be leached and some are so astringent and bitter that they are considered inedible.

Recommended: Priorities of Survival, Rules of 3 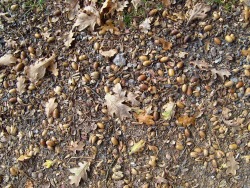 Generally, acorns are leached of their tannic acid with cold water soaks or through slow cooking (while changing the water).  Some are sweet enough to be eaten raw or with relatively little cooking.  Early man learned to bury astringent acorns in bodies of water or to anchor in streams so that they could return later to the leached acorns and prepare food from them.  Enough acorns and our distant ancestors managed to hunker down for a winter… and the rest is history… until current times.  I don’t know how long it has been the case, but I just checked online and found a few companies selling acorn flour.  For years I had been saying that I hadn’t seen any for sale or in commercial products.  Until just the other day nobody ever responded saying they knew of acorns in mainstream commercial foods.

Acorns are one of my favorite foods, though I often don’t get around to them.  You have to find them at the right time (others are looking too and some of them, like the squirrels, take it more serious than me).  Once found they still need to be processed and leached.  Then cooked.  They can be eaten just like that, cooked into rice, mashed into pancakes, or dried and ground into flour.  The mash or flour can be used in just about anything.  It is very tasty.

Although many animals eat acorns as they find them, a good number of the Oaks produce acorns too bitter and astringent for humans to eat without leaching.  The most efficient way to leach acorns if you are home or at a long-term camp is with cold water.  You’ll want to cook them (if possible) eventually, but you can save on fuel by doing the bulk of the leaching with cold water.

If you want to or need to speed up the leaching of acorns, you can do so by applying heat.  Just as with cold water leaching, when the water turns dark you should dump it and add clean water.  You might find it best to heat up a large vessel of water so that after you dump the tannin-rich water you can add hot water.  This will be quicker and will avoid any fixing of the bitterness from alternating between hot and cold.

Mushrooms that Grow with Oak 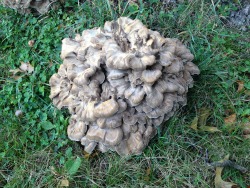 Besides the acorns as a potential staple food or nutritional side dish, Oak forests prove hospitable because of the large selection of edible mushrooms that grow with Oaks.  (Of course, the warning stands that there are non-edible and fatally poisonous mushrooms that grow with them as well.)  There are basically three different kinds of mushrooms: decomposers, parasites, and symbionts.  The subject is complicated by the various forms within these three categories and in that many mushrooms belong to more than one of the three.  Nonetheless, these basic groups are important to learning mushroom identification.  Decomposers break down dead material, such as a downed Oak or one that was killed by a parasite, so they are found on such material.  Parasites attack their host.  In the case of Oaks, they can take a while to succumb to the parasite and in many cases can grow for years before dying from the attack.  Parasites are therefore found on live, dying, and recently dead hosts.  Symbiotic species grow in association with their host.  In the case of mushrooms and Oaks, the fungus is attached to the tree roots underground so the mushrooms grow from the ground near the tree.

Edible species of mushrooms associated with Oak include all three of these types of mushrooms.  Two of the most abundant and well-known edible species are common in the autumn on Oaks – Maitake (Grifola frondosa, Hen-of-the-Woods, Sheep’s Head, etc.) and Honey Mushrooms (Armillaria spp.).  Chicken-of-the-Woods (Laetiporus spp.) is another abundant and delicious Oak parasite.  These three mushrooms (two of them are identified only by genus above because there are groups of closely related species known by the same name) are prolific enough to provide surprisingly large amounts of food.  Indeed, many mushroom hunters content themselves with only one of the three as a foraged ingredient for the table.  But they also miss out on many of the other fungal offerings under Oak.

Mycorrhizal (symbiotic) species include delicious edibles like Boletes, Chantarelles, and Milk Mushrooms (Lactarius spp.).  Chantarelles (Cantharellus spp.) are pretty well known and pretty easy to identify.  Also, closely related is the Black Trumpet (Craterellus spp.).  Boletes (Boletus spp. and other related genera) are perhaps more difficult to identify than Chanterelles.  Although there are many species of Chanterelle, there are a few obvious species that stand out.  The Boletes, however, are a very large group.  Although it is not really true, some people consider all Boletes to be edible (at least those without a strong bitter or spicy flavor).  Certainly, some are very prized.  Lactarius is a group with many non-edible and poisonous species, and many people avoid them.  However, there are some delicious species that grow with Oak, like the Voluminous Milky (L. volemus). 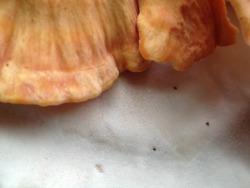 Chicken-of-the-Woods (not to be confused with Hen-of-the-Woods, Grifola frondosa) is also known as Sulphur Shelf and Chicken Mushroom.  I avoid the name Chicken Mushroom because it also refers to another, and Sulphur Shelf is really only good for certain varieties.  It is called Chicken-of-the-Woods because it tastes like chicken and has a similar texture.  I have served it to folks who thought it was chicken, though I wouldn’t have done so intentionally – as some people do react to even the thoroughly cooked mushroom (she helped herself to the pan of leftovers).  As with most mushrooms, Chicken-of-the-Woods should be cooked, and with this one in particular it should be done thoroughly and with plenty of oil.  It has mixed reviews, but I think it is mostly due to it being harvested past its prime (which is common) or cooked improperly (it really does suck up the oil – be libral).  Many people love this mushroom, even if they generally don’t like mushrooms.  Plus, it often grows in abundance.  This is a very significant survival food. 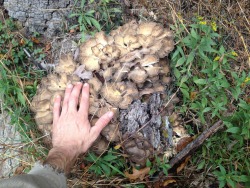 Hen-of-the-Woods is another mushroom that can grow very large and in abundance.  It is also known as Maitake, Sheep’s Head, Ram’s Head, and more.  In this case “Hen” refers to the appearance more than the taste and texture.  When found young (they can still be young and be quite large) they are quite delicious.  Hen-of-the-Woods should be cooked thoroughly to avoid digestive troubles.  It is revered as a medicinal as well as an edible, being used for the immune system to help with infections and cancer.

Although the modern world has largely forgot Oak as a source of food, its wood is still commonly recognized as a superior building material.  Used for hardwood flooring, furniture, and more.

Oak is also still used as an ideal material for martial arts weapons like the bo staff and for the handles of nunchaku.  It is very strong and makes a good choice when a superior and strong material is desired, such as for tool handles and sturdy furnature.

Though there is significant variety among the many species of Oak, it is generally a superior firewood.  It is dense and hard and has a high heating rating.  It does burn a little slow, which is one of its benefits, but it also doesn’t put out light as well as some other choices of wood (Hickory, for example, is also very hard but burns bright.  Lighter woods that burn quick will often put out more light.).  It can easily become smoky when not dried well or not tended to in the fireplace.  Of course, being dense means that it dries slow.  In my mind the classic “all-nighter” is a nice, large, dry Oak log placed on a hot bed of coals (survivalcache.com).

Knowing When To Bug Out