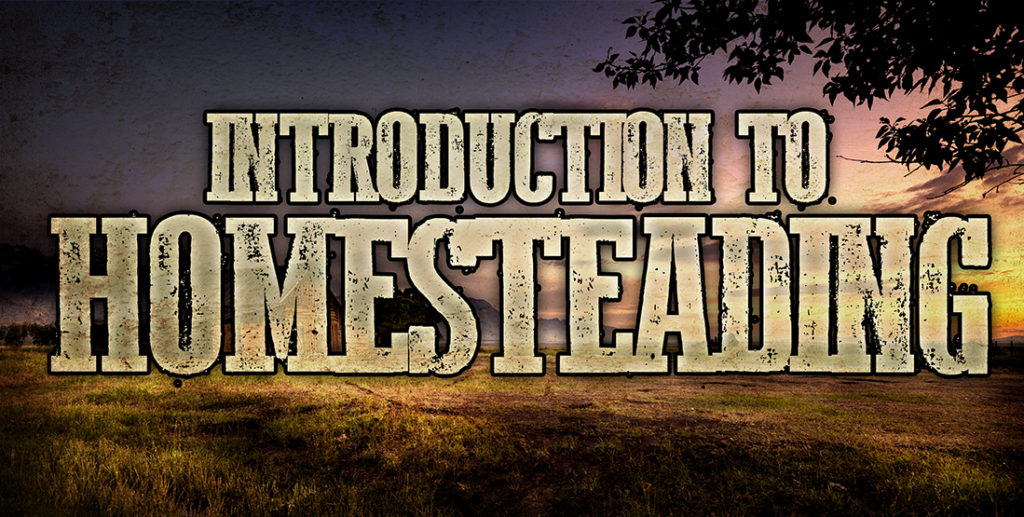 Welcome back, Danger Rangers!  In this article we’re going to talk about homesteading, and luckily for all you knowledge starved folks, this article is a precursor to our complete Homesteading Series.  Homesteading has quickly become a trend in America, with the help of social media, reality TV, and word of mouth, leading to a trickle migration of hipsters who want to be new age hippies, people that just got tired of the city life, and others who want to get off the grid.   Whatever reasons you may have, you need to know something; America isn’t really free anymore, but there are still some liberty loving States where you can live off the grid, but within the law.

Believe it or not, there are many states where homesteading is practically illegal due to over-regulation, EPA (Environment Protection Agency) thuggery, and BLM (Bureau of Land Management) oppression.  Fortunately, there are a few bastions of freedom left for us preparedness minded people, but liberty is not the only thing we based our judgments on.  To give you guys the best option on your impending relocation we’ve summed up the most important elements to a successful homestead that includes;

You know what really grinds my gears?  Reading articles that assume less of your intelligence claiming the only deciding factor for selecting your homestead location solely relies on ‘legalities’ and nothing else!  I’m sorry but homesteading is a very serious life decision to make, and shouldn’t be made lightly.  It’s a big deal!  This brings me to my next point…

Let me try to relate to the concept.  With SERE, Marksmanship, Explosive, and Survival Training coupled with a decade’s worth of experience in preparedness, even I will have a tough time at first.  I was raised in the Appalachian Mountains, hunting everything from squirrels to big bucks, and we fished what felt like every day of our lives.  Throughout spring and summer a lot of my time was spent tending to Mom’s garden, she just so happened to have the tallest sunflowers in the state.  Yup, this super-duper trooper was a bona fide redneck.  Was being the keyword…

I haven’t been home in that manner for years!  Nostalgia has never been an trustworthy feeling, and can trick you into a false sense of security.  Every thing and every place changes with time.  Hell, on a short visit to my hometown, a once sprawling community with real cowboys and farmers, I was completely sickened by how much it changed.  What was once a respectable community of fine upstanding people turned into an opiate fueled Mecca and hub of welfare.  In one day the innocent memories of my childhood were came crashing down by a bunch of shitty people.  Nostalgia is a bold faced lie.

Social dynamics aside, the mere act of running your a homestead is far more complex than what most people expect.  Creating a sustainable source of income, food, energy, water, and shelter requires you to be a jack of all trades, committing yourself to becoming an effective homesteader.  All too often people tend to write checks their skills can’t cash, causing them to go in debt or worse, losing their homestead.  Moral of the story, don’t lose yourself to an idea without committing yourself to it.

Before we move, ask yourself ‘Is it worth it to me to move to a homestead?’ weigh your personal variables, and above all else do not base your decision upon a cathartic but fleeting epiphany.  Now that we’ve mushed past that brief disclaimer, let’s discuss the risk of homesteading, which includes but is not limited to…

To sum up; these risks do not even come close to the benefits of homesteads.  Even then we should still discuss them.  Tending to your livestock and crops is very demanding, and they set the schedule not you.  Attempting to start a homestead without experience or knowledge is a risky endeavor because much of the tasks you’ll be performing are not as easy as you think.  As for the initial cost, I believe in Dave Ramsey’s financial freedom principles, so if you’re going to purchase a homestead, pay in full.  As for the equal outcome ‘risk’, it’s not so much a risk as much as it’s a warning.  If you’re a lazy shill, you won’t do well on a homestead.  You need to farm, hunt, and maintain your homestead.  Slack off and you’ll lose everything you worked for.  Once again, you’ve been warned!  Now, let’s talk about the positives…

While these benefits aren’t comprehensive, you get the gist.  Living on a homestead gives you the opportunity to be free of the 9-5 grind, where if you’re not working in some cramped office space, waiting on some rude folks that aren’t going to tip you, or staring blankly outside a drive thru window, you’re spending the weekend dreading Monday’s arrival.  Being a homesteader severely decreases your monthly bills like water, power, food, child care, and certain types of insurance, allowing you the opportunity to work less.  There is no better form of preparedness training than living on a homestead.  After a couple years on the homestead and the apocalypse comes knocking, you’ll be more than ready.  One of the greatest benefits in my opinion to operating a homestead is the chance to keep your kids out of the state’s ‘educational‘ system!  I mean you got twelve-year-olds having sex in the bathroom, and nine-year-olds stabbing each other, while you have the progs indoctrinating your children to be little drones when they grow up.  Working less means more time you can spend to educate your children!  Lastly, if you’re a hippie, or just like eating well; almost everything you feed your family will be from your garden, livestock, or hunt.  Yum!

Top five states for your homestead…

Now that we’ve set the stage, let’s talk about the best places for you to purchase your homestead. Lucky for everyone who reads this, unlike most people that write these types of articles; I’ve lived or spent a considerable amount of time in many states.  As I said in the beginning of this article we are weighing several different variables when deciding the best states for your homestead… 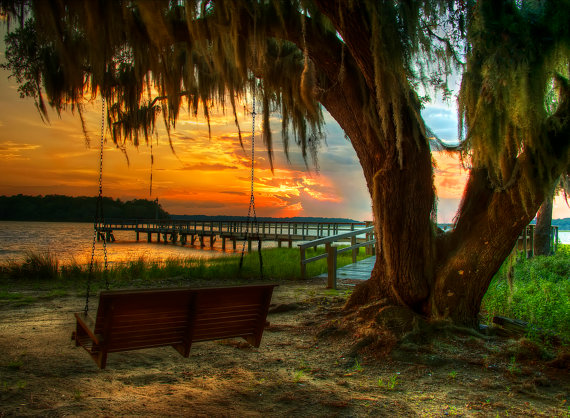 Stay as far away from Atlanta as you can and you’re good.  I personally can’t stand Atlanta but the state of Georgia is incredibly beautiful with an ample supply of wild game like white tail deer, very pro second amendment, and ideal for homesteading.  Downside of Georgia is their property taxes are higher than most at .94% and their land is a little pricey at $2,000 per acre (averagely), while being close to multiple large bodies of water including; Chattahoochee River, Savannah River, Suwannee River, Lake Sidney Lanier, Clark Hill Lake, West Point Lake and Lake Hartwell.

Vermont has one of the most normal weather patterns compared to the rest of the states, while being a little on the cold side.  This state has lots of extremely fertile land, and valuable timber.  Additionally Guns & Ammo ranked Vermont as the 2nd best place for gun ownership in America!  Downside is land will run you about $2,800 per acre (averagely) but if you state your intent to farm there are programs available, but that will open the door to government intrusion so be forewarned.  Also, if you’re a big deer hunter, Vermont is not for you, but the state does have plenty of other wild game including; bear, moose, turkey, various small game, and a plethora of fish species. Lastly, the biggest downside to me is the state’s 1.5%+ tax rate, gross. 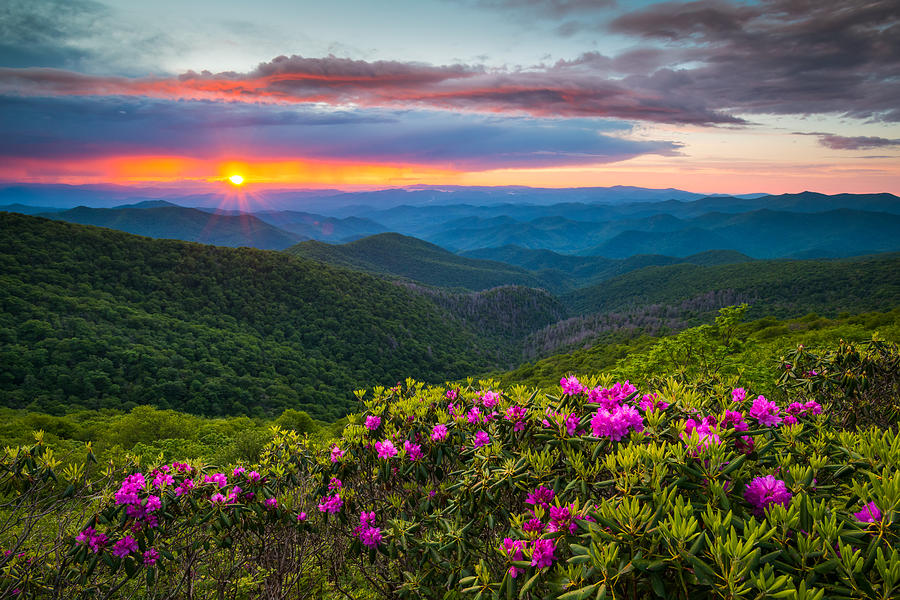 North Carolina is an awesome state for gun owners, and conservatives, but it’s got pros and cons like everywhere else. First, the education level of many residents is lower than what most of us are used to.  No, that is not indicative of everyone, but with fatuousness comes aggression so be wary of those you call friends.  Not to mention, the gun laws there suck.  However, North Carolina has good soil, several bodies of water, and valuable timber.  Again, deer hunting sucks in NC, but with access to the ocean and other great bodies of water you have an unending harvest source.  The land is taxed around .98% and is very affordable.

My Pre K through Elementary years were spent in Clarksville, TN just outside of Fort Campbell, KY and of all the places I’ve lived, Tennessee has some of the most openly friendly people in the country.  There are several bodies of water throughout the state, great soil for farming, low property tax rate of .75% and land averagely costs about a grand an acre.  While the gun laws here suck, there’s plenty of wild game in rural areas, and excellent fishing!

Are You Making This Mistake in Self-Reliance?

Kentucky is the best place for Homesteading…

Kentucky, while it pains me to say it, is the absolute best place to own a homestead. Kentucky is very pro 2A, the LEOs are all low key and not out to mess with everyday people, the soil is excellent for farming, it is literally the best place to hunt several species of deer, there’s tons of small game, great fishing in its several bodies of water, massive timber resources, reasonable property taxes, and an almost nonexistent regulatory presence!  The only downside to having your homestead in Kentucky is the people.  I don’t believe in being pompous, or snooty, but in Kentucky, food stamp opiate munching welfare queens outweigh upstanding girls 99 to 1, and almost every guy there wants to be a ‘thug’.  It’s definitely not the place I remember spending an important part of my life.  Kentucky is slowly devolving into a human cesspool.  K2, Flakka, Opiate addicts everywhere.  Even with such a scolding review of the people, I plan to have my property purchased in full within the next eighteen months, because when it comes to homesteading, you can’t pick a better place.  Stay away from Shelbyville, that place has gone right down the shitter.

In this article we used simple statistics, public data, and first hand experiences to come to our conclusions, this article is not infallible or written in stone.  Some people would be aghast that Texas isn’t listed, but the negatives outweighed the positives in my view (high property taxes, proximity to border, expensive land, in climate weather).  Another example, Alaska isn’t even on this list.  Why?  Because you are reading this article, meaning you have little to no experience in homesteading, and Alaska is a very dangerous place to live if you don’t know what you’re doing.  Wyoming, same thing; subzero winters, thin game opportunities, and an economy lurching towards the chopping block nixed them from the list.  Just because I didn’t feel these states should be on the list doesn’t mean you shouldn’t move there if that’s where you want to be.  Hell, you got green Google ‘geniuses‘ trying to run homesteads in the barren wastelands of Southern Nevada.  Moral of the story, I’m sure you can make it work if you apply yourself.

This article is Part I of our Homesteading series, if you look forward to the next article feel free to subscribe and you’ll be alerted when Part II is published.  Have a question, comment or suggestion?  Leave it below (UScrow.org)!

7 Of The Most Liberating Benefits Of Homesteading