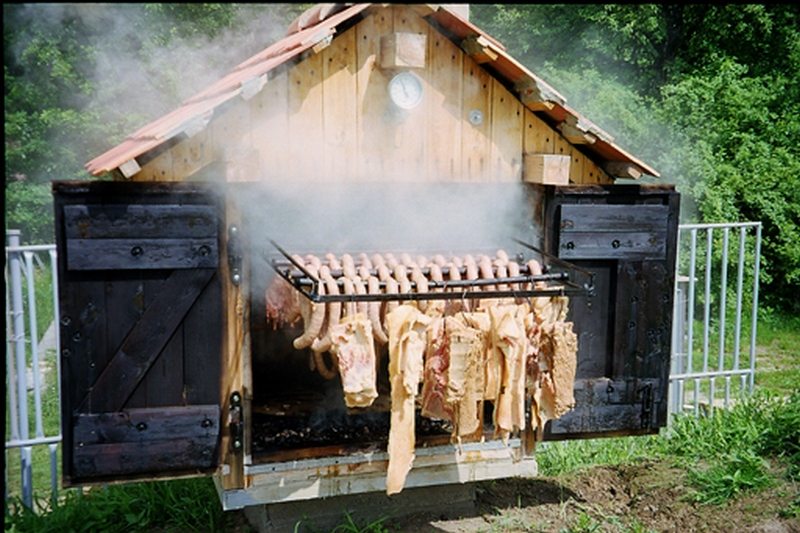 An efficient, proper smokehouse is very simple and inexpensive to build. Such smokehouse  may be constructed from so many different materials that one’s imagination is the only limiting factor.

If you desire to prepare hot smoked food in small batches for individual meals, or for parties, commercially available smokers may be the only things to meet your needs.

You should know that most of these products rely on hot smoking. This means that the food must be consumed immediately.

If you plan on using cold smoking, you’ll need to provide for the following when building a smokehouse: a fire pit, a smoke chamber (where the meat is actually smoked), and a smoke tunnel to direct the smoke away from the fire pit and into the smoke chamber.

Having these three units in mind, it takes but little imagination to find  the material around the house that can be efficiently used to build a successful smokehouse.

The fire pit should be set into the ground 2 to 2½ feet deep. It can be an old kettle, a simple box, or other types of enclosure in which a fire may be built. A simple hole in the ground might well do; however, it would be best to line it with rocks.

The pit must have a top, if only a board across it, to act as a damper to regulate the draft and to control the amount of fire in the pit. A metal cover would be ideal, be it the top of an old metal drum or a piece of sheet metal.

This is the unit in which the meat is actually smoked. Therefore, it should be large enough to accommodate the amount of meat being processed. Again, you can use an old metal drum, a wooden box, or a metal cabinet. And be certain it is clean; time spent in scrubbing it to remove all dirt and anything that could conceivably impart an unwanted flavor to the meat will be time well spent.

There should be no paint or fresh painted enamel on the smoke chamber interior to cause unpleasant odors and tastes and to give off chemical poisons. Wash with a mild detergent, then rinse with pure water and let the chamber dry in the air until ready for use.

Not only does the smoke chamber contain smoke to surround the meat, but it also must have a method of controlling the escape of smoke so that fresh smoke will constantly rise around and past the meat.

So there must be a top to the smoke chamber that can be opened and closed in a controlled way to act as a damper for the draft. This can be improvised from boards, the top of a metal drum, a piece of sheet metal, or from a dozen other things found around the house or farm.

Some people use wooden barrels for smoke chambers, but since the staves tend to shrink under even mild heat, smoke can escape from the sides, leaving an insufficient amount in the chamber to process the meat.

Such escape through the sides can also result in uneven smoking. A metal drum would be better, as would a box that would not shrink — preferably made from long-seasoned hardwood.

The smoke chamber should allow the meat to be suspended while being smoked. Crosspieces from branches, dowels, or similar would be fine to suspend across the top of the chamber. Twine, wire, S hooks, or similar means may be used to suspend the meat from the crosspieces.

One might prefer to use wire mesh shelves (especially for small pieces of meat), in which case shelf brackets would have to be secured to the interior sides of the chamber. If so, install them to provide easy removal for cleaning.

The best mesh would be stainless steel; avoid galvanized wire, brass, or copper, as these can give off oxides or chemicals that are injurious to the meat and to those who consume it.

Some people have been very successful using old refrigerators for smoke chambers. These have the advantage of having removable shelves built into them. They can easily have a hole cut in the top for the smoke to escape and one in the bottom for the smoke tunnel connection.

But if you use a refrigerator, be careful that it is padlocked when unattended; far too many children have met fatal ends by inadvertently closing the door and locking themselves inside old refrigerators while playing.