It’s really simple.
When someone comes to take what you’ve got, do you defend it by FIGHTING or RUN TO FIGHT ANOTHER DAY?

After all if there are only a few attackers, you’re better ‘armed’ than they are, behind adequate ‘defences’ to withstand an assault, you’d be a fool to just walk away. Some will say it’s a judgement call and for the most part I’d agree only that judgement call needs to be tempered with a lot of analysis of what is going on. For example.

The age-old problem for the survivor going to ground to wait out whatever is SUPPLIES.

Now I could go on through my list but that’s the essentials covered.

So a couple of scenarios is called for:-

You are currently in a CBRN scenario 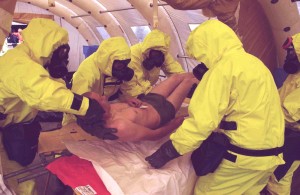 It may be unsafe to leave your refuge under any circumstances.
So yes I’d fight it out. Even though you could be facing superior numbers of assailants.
After all letting others in during a CBRN scenario may be admitting contamination into your shelter. As for you fleeing into contamination? That’s not really an option is it.

Considering the force attacking you.
Early into a crisis, desperation may not have set in yet, but they are sensibly seeking adequate shelter and perhaps you’ve got the only hardened shelter they have found. The issue for you is have they had time to arm themselves to a degree that could overwhelm you? I submit they may not have had time in their flight from the event but that’s not exactly cast iron logic, just a guesstimate. The next problem for you is they may still be thinking correctly and not affected by whatever the CBRN event was.

Tactically, clear thought by an attacker is not to your advantage, panicked, sick, tired, dehydrated, and weak are all things I LIKE OTHER PEOPLE TO BE.

Then you’ve got radiation sickness with the “feel good” time between the initial exposure and the relapse into symptoms. They may look “OK” but very soon they will get sick again.

As for biological attack? It takes time for symptoms to develop. How do you know who is infected?

Now comes the bigger problem and it’s time dependent.
In a big die off scenario, survivors may have used that time to build up an arsenal of weapons. You’ve also got to be thinking that they may have been in a hostile environment and used those weapons. Thus the human ‘inherent dislike of killing’, the sight and fear of death, and the fear of combat, may have been conditioned by events right out of them.

So what you may be facing is a ‘conditioned, numb to death’, possibly tactically inexperienced, but well armed force. Yet they may be in the condition I like others to be in.
OK, they may not be thinking straight but now desperation and probably anger will drive them on. THEY DEFINITELY have nothing to lose by attacking you.

You may also want to read: Improvised Weapon You May Not Have Considered

Only, as said, that would have taken time so now you’ve got the judgement call to make.
Stay or flee as the CBRN event may have diminished enough to allow you to travel. A purely subjective type of decision. 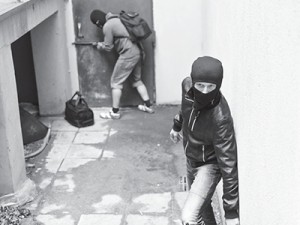 What are attackers looking for?
Shelter, what you’ve got i.e. supplies, money or wealth, weapons, or your women?
I submit there will be quite a few types of people you will be facing including:-
The unprepared single, a family or loose group, the well equipped (usually armed) survivalist, a gang or a group of marauders, the authorities in the form of military or paramilitary police.

How you deal with them is up to you BUT the order I’ve written them is an indication of how I view an increasing threat level.

Is skipping out the back door a bad thing in a non CBRN scenario?
Nope, not at all as the wise prepper / survivalist would have concealed their main inventory well. Then would it matter if the invaders wrecked the place?

One thing is certain, you can always go back being very careful to check for “presents” aka anti personnel devices aka IED’s.

Having said that, in civilized countries with access to “boom” making material, what is there to stop you leaving some of your own FU packages lying around?