Why masking up may never be enough. Isolation, the argument for and why.

CBRNE is a military acronym that stands for:-
Chemical, Biological, Radiological, Nuclear and Explosives.

So many think CBRNE contamination and destruction is only confined to war but it isn’t.
Contamination can take many forms and have many causes.

So we have the full range of chemicals from industrial accidents, farming processes, domestic fires, to full on terrorist or warfare products like biological and chemical agents (Blister, Blood, and Nerve agents). Not to mention the products of “BOOM”.

Biologicals scare me big time as they take time to mature and develop in your body.
Radiological could be radio-active products from a dirty bomb to dissolved radioiodine in the water. As for Nuclear? From dust pulverised by the Boom, to pure radioactive fallout is on my mind.

All those products can be delivered as Droplets, Gaseous, or in Particulates (dust).
Some have an odour, and a taste (metal mouth) which is a common symptom of radioactive contamination of all kinds. The problem is if you can detect either you may have already absorbed a lethal dosage.

So what do you do to protect yourself.
Although personal protection equipment PPE helps, at best all it is doing is buying you time. That time must be used to put distance between you and the contamination and get you safely into suitable cover. Once there you will need to decontaminate and prevent further exposure and reaction from whatever contamination you are carrying, taking whatever remedies you can use.

That PPE doesn’t have to be complicated though.
It does however help to protect the major routes into the body especially the lungs and the skin. PPE should be WATERPROOF not shower proof to keep chemicals and other gunk off the skin. The problem is very little is radiation proof or “gas tight”. 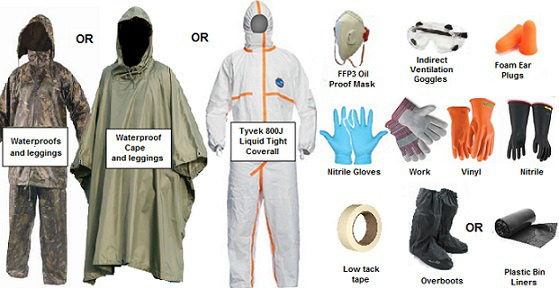 As for donning all this.
There is a set order (isn’t there ex-mil).
Only few have full face respirators with the correct in date filters or access to an endless supply of filter cartridges. It’s not like they are freely available on the high streets.

Isolation and the argument for it when faced with a CBRN event.

Your PPE and personal skills should see you safe in adequate cover and decontaminated.
Once snug, you have three tasks.

Why think about it?
If there was a CBRN event do you really think it’ll all be done and dusted after say two weeks?
Chemicals usually have a short life, especially if it rains so that’s good.
Only what if it was Biological?
Even if death occurs in days,  the infection rate will multiply exponentially until two things happen.

Radiological or Nuclear?
Everyone doesn’t just die when the BOOM happens.
Acute radiation syndrome (aka radiation sickness) takes time to kill people off.
After the initial sickness people start to feel better only to relapse back into sickness or worse. Some dying in as little as 2 to 4 days for the heavily contaminated right out to 4 to 6 weeks for those ‘lightly’ contaminated without skilled medical care.

There may be a lot of people wandering around in moderately to very poor shape.
Your problem is anyone you meet is probably well irradiated and a danger to you by just getting close.

Yet that problem doesn’t stop with humans.
Dogs, cats, cows, pigs, deer, rabbit, birds, fish, all your hunt or trappable foodstuff will probably be unsafe to touch let alone eat. That’s the thing about animal and fish, they just keep going until they expire.

So now you’re thinking foodstuff and safe water.
Only to go and get it you’ll be in the open across land that might be contaminated.
AS MAY BE THE OBJECT OF YOUR FORAGING, contaminated I mean.
My new question is have you the necessary detection equipment to identify whatever contamination you may come across be that chemical, biological, or radio-active material?

You’ll be beginning to see why I’m questioning whether you should stay isolated, mix with the survivors, or just wait for at least 6 weeks before interacting with others as most of the die off would have been completed by then.

A tad more thought promoting than whether you eat beans or rice for tea isn’t it?