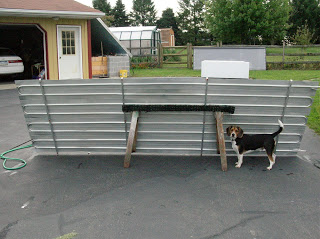 We purchased an old Reynolds Aluminum solar hot water heater from someone who removed it when they replaced their roof. It was not running but restorable. All major components were there and repairable except for the hot water tank. That was replaced with a standard 80 gallon electric hot water heater. Below: Front of panel removed from housing. Above: Rear of panel, with Jack standing guard. 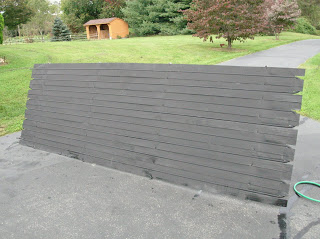 The panels each had a pinhole leak, and tons of auto radiator stop leak inside the tubes. After flushing them out, I soldered the holes with aluminum solder. A tricky operation, since the melting point of the solder is just slightly lower than the aluminum panel. I used a torch to heat the panel while using an electric iron to melt the solder. It is a very strong repair. 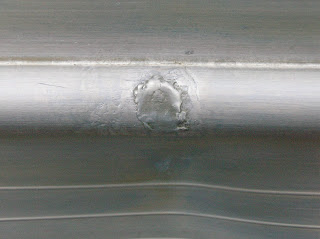 Next came reassembly and installation on the roof. Not an easy task, as the panels weigh 200 pounds each! 90% of the weight is the 1/4″ tempered glass window. The heat absorber is a clever design, made from one continuous piece of extruded aluminum. It is a shame Reynolds is no longer around. 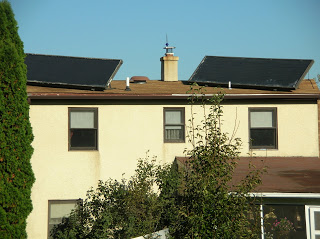 Next step was installation of the pumps, heat exchanger, electronic controls and tank. I was not about to buy an expensive solar hot water tank when a standard Whirlpool 80 gallon electric heater is nearly as good. The main difference between the original Bradford-White and the Whirlpool is that the Bradford has 4 ports on top, while the Whirlpool has 3. While 4 ports is ideal to separate the heat exchanger from the water supply and outlet, it works fine with 3. A pipe tee in the inlet port provides the 4th port.

The Reynolds was a well engineered system with everything contained within the circular heat exchanger. It is very compact, yet not difficult to maintain.

VIDEO Guide: A Prepper’s Guide in Safeguarding a Home

Below:  A picture of what is inside. The red pump on the left is the antifreeze pump, and has a cast iron body.  The gold pump is the fresh water pump, and is stainless steel.  They are both original Grundfos pumps, and are very well made. Behind the pumps is the expansion tank.  Above that is a sight-glass I added.  It lets me see the antifreeze and whether it is flowing. 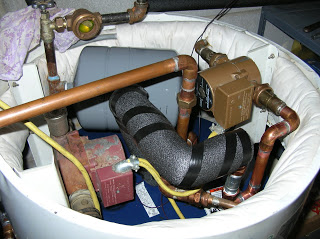 The next step was to run 5/8″ aluminum tubing from the basement to the roof. I ran it up the outside wall, hiding the insulated tubing inside aluminum rain spouts to match the house. It looks like an additional downspout and is not very noticeable.

The original aluminum fittings are of a type I have not seen anywhere else. The ones on my system were no longer usable, so I replaced them with aluminum AN style aircraft fittings.  I also bought the tubing from an aircraft supply house.   Here is a picture of an AN fitting: 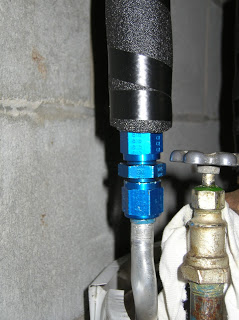 They are flare fittings, which of course requires the tube to be flared using a flaring tool.  Flare fittings are extremely reliable, which is why they are used on airplanes and critical things like auto brake lines.

Even though the panels are a prominent feature on the rear of the house, they are nearly invisible from the front.

Was it worth the effort? Yes! On any sunny day, even in winter, the system can make 80 gallons of hot water. In the winter, the max temperature is 120°, while on summer days, the system can easily reach it’s high limit setting of 160°. The system has been running nearly a year now and has supplied 65% of our hot water needs over that period. See chart below:

I record the tank temperatures every day, once in the morning and once in the evening. I also record the number of hours the system ran. From this I can calculate the percent contribution made by the solar heater. I will post an updated chart that shows the average contribution is now over 65%. The solar contribution does not look impressive in this chart because I started collecting data in November, just in time for the sun to reach it’s minimum for the year. In July the system produced 85% of our hot water. It is not cold weather but cloudy days and weak sunshine that limit the system. I have observed the panels warming up to over 100°F only 1 1/2 hours after sunrise on mornings with the ambient temperature at 20°F and below.
Total cost for getting this system up and running was $1,000. It is saving us over $300/year at current rates, for a payback in about 3 years. We will appreciate it even more if energy cost rise as predicted. 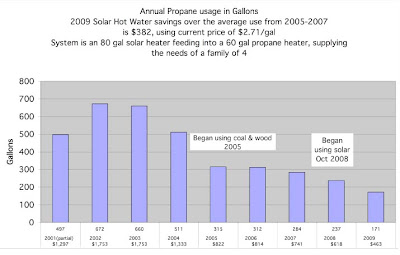 I believe there are many of these systems sitting unused on roofs around the country. I missed out on getting another one by mere hours. I knew of a house with one of these systems and had considered stopping and asking them about it. Then one day, I went by and they were getting a new roof. Unfortunately, the panels were already scrapped! These well designed systems still have life in them and deserve to live a few years longer. 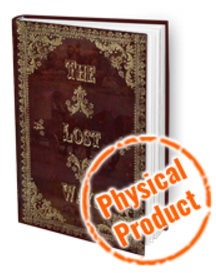 UPDATE:  2010 was an even better year for the system, with a few months approaching 100% solar, and a yearly average of 76%.   I switched the backup source of hot water from propane to electric when my propane heater failed. I decided that the old fashioned tank style heater with a pilot light is too inefficient, and tank-less ones too expensive.  It was far more cost effective to install an inexpensive 60 gallon electric as the backup.  This has worked out well, for I still have monthly electric bills that are very low, if not zero. See my Solar Electric Upgrade post for charts on electricity production. 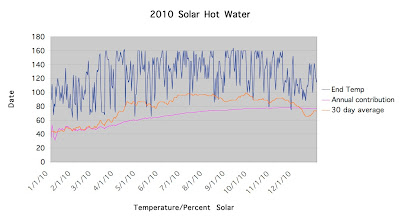 My propane usage dropped so low that my former propane company no longer wants my business.

UPDATE 2012:  I compiled 3 years worth of daily records and put them into a new post.
The system has now been operating for over 4 years, and has required nothing more than a gallon of antifreeze over that time.  I stopped taking daily records, figuring that 3 years worth was sufficient to prove the value of these systems.  Given my 3 year average of nearly 2,000 hours of operation, I estimate that it has nos surpassed 9,000 hours.  If these are original pumps, they may have 50,000 hours of total running time.
UPDATE 2014: The system has now been in operation over 5 years, and has paid for itself twice over.  The automotive heater hose that is used to connect the panels to the pipes failed. Their lifetime is much shorter in the severe conditions of a solar heater than it is in an automobile.  I recommend replacing them every four years.  The panels, pumps, and heat exchanger all look like they have many years of life left in them.