If you are familiar with pole-barn style construction, you know that they are relatively inexpensive, and go up fast.  Usually a matter of days. 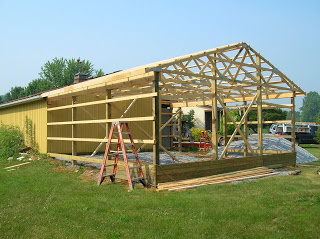 However, from the inside, they aren’t very attractive.  They are also extremely hot in the summer, thanks to the steel siding.  And, of course, cold in the winter.

I wanted this garage to be suitable for a year-round workshop, but without spending a lot of money.  I’d need insulated walls and ceiling, but not necessarily to the degree one would use in a house.  And, I wanted to keep things simple. I immediately ruled out fiberglass insulation – no conventional stud spacing inside these structures, and I did not want to risk fiberglass up against the back of the steel siding, for condensation concerns. Instead, I chose rigid foam boards faced with aluminum.  These I could attach directly to the wall studs, and add drywall directly over that.  They fit between the poles, giving the interior a nice exposed beam appearance. Just 24 sheets of insulating board and drywall to complete the walls.  So far, so good, and well under budget. Also you can learn how to build a house from cordwood:  Cordwood building – An old-school building technique. 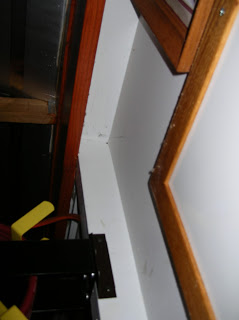 The drywall extended up and behind the beam supporting the roof trusses.  I simply cut a strip of drywall slightly wider than the width of the space between the wall and the rear of the beam. I let one side rest on top of the drywall and the other rest against the back of the beam.  Since the piece was slightly wider than the space, it wedged itself at a slight angle. This has proven to be surprisingly airtight.  I often experience strong winds in the winter, yet the shop is draft-free and easy to heat.  The space behind the beam is a perfect fit for single tube florescent lights, so I added some over my milling machine. 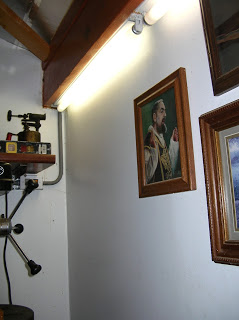 There was a small space between the top of the beam and my ceiling panels, so I cut some 2×4’s into 3 thin strips and used them to cover the space.  I countersunk the nails in the beam enough to put some putty over them. Then I stained and polyurethaned everything. Little details like that added greatly to the appearance for very little cost.  2×4’s are much cheaper than wood moldings or other lumber, and since I’m slitting each one into three, they make very inexpensive trim pieces.  I made baseboards for the shop in this way, too.  It took only 6 2×4’s to make all the trim I needed. 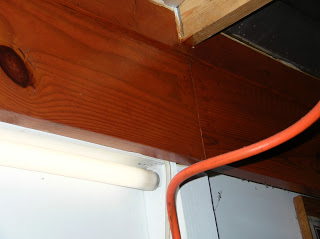 The ceiling was more complicated.  The bottom of the trusses are only 8 feet above the floor, and I often work with 8 foot long materials in the shop.  I did not want to be hitting the ceiling with my materials, nor did I want the claustrophobic feel of a low ceiling.  I decided on a variation of a cathedral ceiling, with the trusses mostly exposed.  This is where things got tricky. 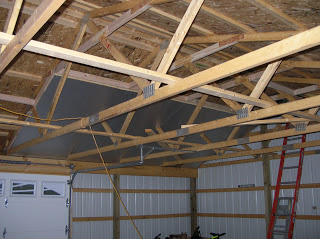 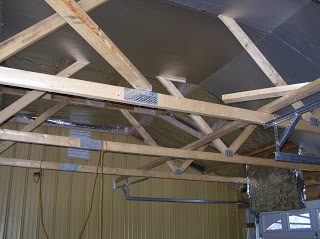 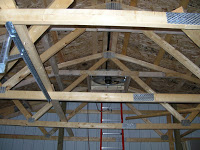 The trusses are not centered over the inside of the garage, for there is a 2 foot overhang over the garage doors. So, I could not follow the roof line.  Also, I wanted by ceiling to have a flat top, to leave a space for a whole-house fan.  It took about 40 2×4’s to frame the ceiling and 18 more panels.  Still under budget. (Survival and prepping books HERE!!!)

However, the panels went up slow.  As the insulating panel would double as the finished ceiling, they had to be trimmed precisely.  No patching things up with spackling compound here!  All of the notches around the trusses had to look good for this to work.  And, work it did.  After a few gallons of paint, lighting, and a workbench made from old office desks, this is the result. All for  a lot less than a million bucks! 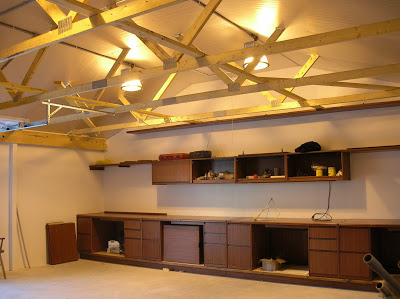 <<How to gain complete energy independence>>