When SHTF, making the wrong decision can cost more than you will ever realize, so advice on what to do and what not to do should be sought out and heeded.

You see many articles like „Ten Things to do When SHTF“ or „ 5 most likely situations…“ or similar.

The truth is that these articles, while a great way to learn something (I’ve written posts like that too) are, very often, ‘over simplying’ situations or scenarios that most likely when SHTF are going to be dynamic and probably complex…

It is essential that you are ready to adapt because there are many variables about what to do (or not to do) when SHTF. So read these ‘lists’ but be careful of how ‘attached’ you get to them.

My main point here is this: there is only one thing worse than being without a plan (for/when SHTF). And that thing is having plan and sticking to that plan so heavily that you simply end up dead (because your plan is not working for that particular SHTF situation)

So what to do (or not to do) when SHTF? Lets look at ‘two sides’ of a couple of things:

Panic is a „plan killer“. Panic is a fearsome enemy. You may have a very good plan and preparations and end up dead, simply because you failed to understand how bad panic is going to affect you.

There is research that says that 74 % of people who, in a case of disaster and being forced to quickly leave their home would forget to take a lighter and something that could boil water in (in order to disinfect it)

We could say that research is for „non –preppers“, but be aware that in the case of panic and fear (and we ar all are going to experience some level of that for sure) you are going to make mistakes. Be ready to accept, adapt and overcome this.

Fear of, or when in, danger is a powerful thing and you need to not deny it, rather go into a mindset like „s..t, of course I am afraid just like everybody else, let me use that fear and do something smart“

The good thing here is that most of the people around you are going to be in some kind of ‘panic’ (fear, confusion). Let’s work on the basis that you, as a prepper, are going to be in a lesser state of panic than these other folks.

So suddenly, panic and fear can become friends in some situations, use it in your favor.

For example while everybody else is in panic still figuring out what really happened, use the moment for a last run to the grocery shop for more food, or use it to simply to get away from the danger.

This short video offers some very powerful examples of how people react during a bad event.

There is also one important moment here to recognize, some researchers conclude that people actually panic much less than we imagine.

So they stated that in cases of some catastrophes (disasters in sports stadiums, factory disasters and similar) first reactions of a number of people is not to panic, rather to help other (injured) people.

I agree with this, but only to a certain level. If you find yourself in the street and see a building collapse suddenly, and hear screams from rubble, most peoples reaction who just saw the event is to go there and help injured people, but if you see (or hear) other buildings continue to collapse you’re going to panic, and other people are going to panic.

It is an example only, but in the case of a serious SHTF event, expect panic and simply use it in your favor, however you can.

I’ll try to explain this „change the rules“ rules with one small, short but serious real life experience.

Just after the S. hit the fan here, a man went out to seek help. He saw a police officer, he ran towards the officer and cried for help (his wife was wounded at home) and the police officer just shot him in the head and robbed him.

Story could be (and actually it is) longer, because I should go through the events leading to that, panic on street, no info. on what is going on and much blah blah blah.

But the point of the story here is that dead guy simply failed to change rules from the mentality of „their is a police officer“ to the „their is an armed dude in police uniform.“

When SHTF, rules are changing, all rules. Rules like“ police are going to help us, goverment is going to take care for us, there is help in hospital etc etc.

You simply do not know, rules are gone.

I am saying that you may use other peoples lack of knowledge and adaption to the new rules and for example wear EMT uniform in first day of chaos in order to go through some part of the city, or a police uniform, or act like a rescue worker or whatever you think makes sense in your particular situation and moment.

Switch yourself to the SHTF situation thinking in all ways and means. 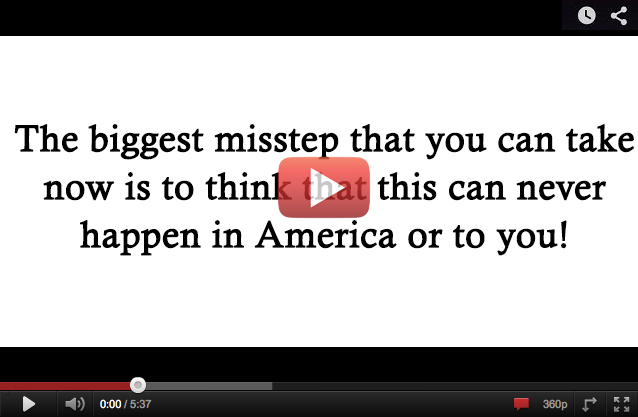 ABCs  (Go Back to Basics)

It is again about big and small circles.

People tend to think too much (actually can be bad when SHTF initially) simply because there is no real information.

That means if suddenly something bad is happening (SHTF) and you do not know what to do, do something that is useful. Why don’t you use that moment and go to fill your bathtub with water for example?

Most probably you’re going to need it.

Or go through your equipment, or check your weapon?

Just go through the ‘basics’ if you do not know what to do when lacking real information.

YOU MAY ALSO LIKE TO READ: Prepare Now to Avoid Panic Later