Here’s an idea for a fire pit that is great for gathering around a campfire and for cooking in any season. We’ll use it all year round even in the cold winters of Vermont. The floor of the pit is lined with firebricks, which hold and radiate heat better than a dirt base. They also drain better because they have sand between and below them.

The first step was to pick a fairly level spot with room for folks to gather around. The diameter of the pit is 60 inches; big enough to have a good size fire and big enough for our 36 x 36 inch cooking grate.

I drove a stake in the center of where I wanted to locate the pit, then attached a string to it, measured a 30 inch radius and used an axe to cut the circle using the string as a guide — like a giant compass. Then I got my oldest son to do the digging and raking. This is a highly recommended step, provided you have a strapping young son!

Next we leveled the area, tamped it, and leveled it again. To be honest, we probably tamped and leveled six or seven more times; your personality will determine the number of things you will obsess over.

Next we put a layer of sand, so the bricks could be leveled easier than on the hard packed dirt. We smoothed the sand with a 4-foot 2×4 and, of course leveled the sand (several times).

Now, I was ready to lay the bricks. My son knew it was best to leave me to work alone at this point, knowing I could turn an hours job into an afternoons’ work because every brick had to be, well, perfect! So, starting at the center, I worked my way out spacing the bricks a sticks width (about a ½ inch) apart on all sides. I also did my best to keep them all level.

I purchased the firebricks at a local lumberyard. Check around for prices. I found the same 9x4x2.25 inch firebrick cost anywhere from $1.00 to $2.50. The firebricks are much better than regular bricks. They are larger and can withstand the heat without breaking down over a long period of time. A standard house brick will crack and breakdown from the constant heat much sooner. 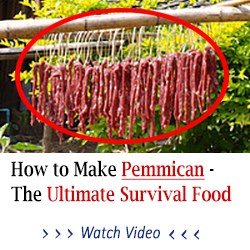 Once the firebricks were in place, I worked sand between them. I gently poured water over the sand to get it to settle into the spaces between the bricks, I added several layers of sand as it settled until the sand was flush with the top of the bricks.

I filled the dug out circle as much as I could with the brick and sand floor. I cut a few bricks to fill the gaps as needed. The bricks will break fairly evenly if you are careful. I added extra sand around the outside edges to fill out the circle.

Then it was time to build the low stonewall around the perimeter of the pit. (How to gain complete energy independence)

Stones are easy to find in Vermont! Use stones from the woods or a field, but not from a stream bed. The stream bed stones can be saturated with water and can crack or explode when heated.

I placed the stones overlapping the bricks enough so there were no large areas of sand showing. I endeavored to make a pleasing circle of stones that fit together as snugly as possible. I am not an expert stonewall builder, so, it took me awhile and a little trial and error. Once I was satisfied with the way the wall looked, I put some extra sand between the bricks and stones around the entire perimeter. Best selection of SURVIVAL BOOKS>>

Here is the finished fire pit.

7 Of The Most Liberating Benefits Of Homesteading

Step By Step How To Make A One Year Stockpile>>

A friend welded a fire grate together for us and we use it to cook over the new fire pit.

Taste testing my wife’s cabbage kielbasa soup is a treat. Or cooking some marinated pork tenderloins right on the grate works great too (The Top 10 Survival Recipes from the Backwoods). A warm fire and a delicious meal makes all the fuss worth it!

Our fire pit should give us many seasons of use with just a little maintenance each year (RC Kirk).